With the reference to the notification in the website of Rajya Sabha, inviting written memoranda regarding “The National Commission For Human Resource in Health Bill 2011”, I am hereby forwarding my views & suggestions related with creating an individual discipline for Physiotherapy in accordance with the ‘k’ clause of the bill.
Findings of the Planning Commission of India (2007-2012):
Point number 3.1.104 states that “In the field of paramedical education, priority will be given for establishment of National Para Medical Council as an apex body to determine standards and to ensure uniform enforcement throughout the country. On similar lines, councils for physiotherapy and occupational therapy should also be established”

The documentation of the Planning commission clearly distinguishes Paramedics from Physiotherapists

Documentation about Physiotherapy in the Thirty-First report on Paramedical and Physiotherapy Central Councils Bill-2007 (Presented to the Rajya Sabha on 21st October,2008 and laid on the table of Lok Sabha on 21st October,2008):
Clause 8.2 “Physiotherapy being considered a discipline distinct from paramedical disciplines finds a specific mention in the title (Paramedical and Physiotherapy Central Councils Act, 2007)”
Clause 9.36 Committee’s attention was also drawn to the parallel position of Naturopathy and Yoga when compared with physiotherapy as both were based on physical and psycho-somatic methods of diagnosis and treatment, with both claiming benefit to the patients in a drugless manner. It was argued that both Naturopathy and Yoga are granted equal status along with Ayurveda under AYUSH.  Thus, physiotherapy also deserved to be granted an independent status.
Clause 9.46 “The fact that physiotherapy education over the years has made significant advancements and has evolved as a distinct profession seems to be well established.  This is strengthened by the considered opinion of Ministry of Law that physiotherapy profession should not be equated with the paramedical professions”

Clause 9.47 “The Committee also takes note of the fact as mentioned by the representative of the Ministry that in USA, physiotherapy profession has reached a stage where these professionals can practise independently.  Not only this, in some of the international Acts, it has been specifically provided that physiotherapists having the required experience can give physiotherapy treatment without a referral. These Acts also confer upon a physiotherapist the right to practise with or without referral governed by the circumstances of the case.”
Clause 25.5 During the course of interactions, the Committee observed that there was a lot of dissatisfaction among the allied health professionals particularly physiotherapists and occupational therapists with regard to their pay scales. It was brought to the notice of the Committee that their entry into Government service after completion of four and a half years degree course in the respective profession was not being addressed properly.  The Committee was given to understand that their recurrent demands for bringing parity in the pay scales have yielded no results so far.  General perception was that discriminatory treatment was being meted out to them as their pay scales did not commensurate with their status and responsibility.
Clause 25.6 The Committee feels that all the allied health professionals including physiotherapists and occupational therapists play a crucial role in the field of medicine and physical rehabilitation. The Committee, therefore, strongly recommends that their legitimate interests should be taken care of and their existing pay structure may be revised according to their qualifications and duration of the course they have to put in before entering into a Govt. job.
The findings and documentation of this committee are in favour strong of an independent status and council for Physiotherapists.
The World Health Organization  (WHO) Classification of Physiotherapists:
World Health Organization (WHO) has classified physiotherapists in professional group (ISCO Code 2264) and paramedical professionals have been classified in a separate entity ( ISCO code 2240).
(Reference -WHO: http://www.who.int/hrh/statistics/Health_workers_classification.pdf)
Rehabilitation Council of India:
As per Section 1(2)(n), of the RCI Act following categories of professionals / personnel have been notified under the purview of the Council:
(i) Audiologists and Speech Therapists;
(ii) Clinical Psychologists;
(iii) Hearing and Ear Mould Technicians;
(iv)  Rehabilitation Engineers and Technicians
(v) Special Teachers for Educating and Training the Handicapped;
(vi)  Vocational Counselors, Employment Officers and Placement Officers dealing
with the Handicapped.
(vii) Multi-purpose Rehabilitation Therapists and Technicians;
(viii) Speech Pathologists
(ix) Rehabilitation Psychologists;
(x) Rehabilitation Social Workers;
(xi) Rehabilitation Practitioners in Mental Retardation;
(xii) Orientation and Mobility Specialists;
(xiii) Community Based Rehabilitation Professionals;
(xiv) Rehabilitation Counselors / Administrators;
(xv) Prosthetists and Orthotists;
(xvi) Rehabilitation Workshop Managers
During the year 1998/99 following three categories were notified vide Govt. Of India Notification No. 674 dated 13.10.98 for inclusion under the Council & subsequently same were withdrawn (through their Notification dated the 25th June, 1999) from the purview of the Council as Ministry of Health was planning to have a separate Council for them.
(i) Physiotherapists
(ii) Occupational Therapists
(iii) Ophthalmic Technicians

Public health workforce in India:
Certain categories of health workers, such as physiotherapists, medical technicians and faith healers, are not recorded in government statistics, making it difficult to estimate the overall size and composition of the health workforce

A separate individual discipline according to the ‘k’ clause of the The National Commission for Human resources for health bill, 2011 will make recommendations to ensure the standardization of such training and the monitoring of actual performance of Physiotherapists in India.

I request you to kindly consider the present scenario in the physiotherapy education and our nature of duty and job responsibility and do the needful.

Thanking you in anticipation.

Your’s Sincerely,
Einstein.J
Physiotherapist
ESI PGIMS&R and Model Hospital (Ministry of Labour and Employment, Government of India)
Rajaji Nagar, Bangalore-560010
Memorandum prepared by:  Einstein.J and Suresh Babu Reddy
Note : Requesting all Physiotherapists to send two copies of this memorandum with your name and designation or edit it as per your need and send it by post to the above address before February. Please contribute for Professional growth.The memorandum should reach the committee before the first week of February 2012.
New Physiotherapy Jobs Website: www.physiotherapyjobs.co.in 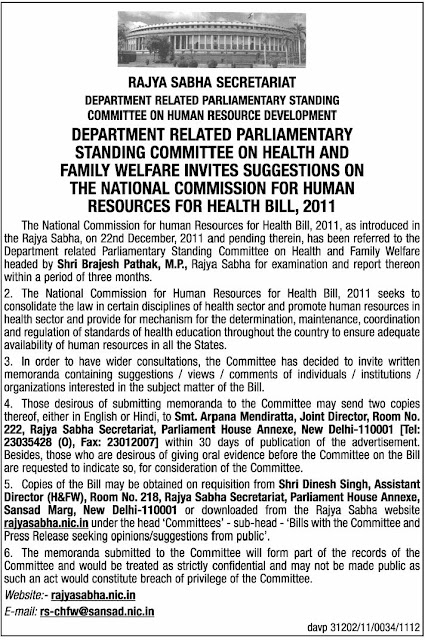