Seven-time Formula One champion Michael Schumacher is reportedly showing small signs of recovery, giving renewed hope to millions of fans, and his family members. Since he woke from the medically-induced coma, the driving champion has been rehabilitated to his home in Lake Geneva in Switzerland. Latest reports suggest that Michael Schumacher will now be bound to a wheelchair and undergo extensive physical therapy in order to prevent muscle degeneration.

If Schumacher was to recover, he might be bound to a wheelchair as he undergoes proper physical therapy in order to act more independently and start gaining mobility by himself. The good news is that Michael is not stuck in a bed. When not undergoing physical therapy to avoid muscle atrophy, he sits in a chair in front of the windows of his villa, overlooking on one side the snowy peaks of the Swiss Alps, and on the other the shores of Lake Geneva. #KeepFightingMichael

Schumacher is now able to recognize faces, and cries when he sees and hears his wife, Corrina and his two children, Gina Marie and Mick Jr, according to Cross Map. He tends to get emotional when he sees them and is now communicating with family members using his eyes. This can be seen as a sign of improvement and a step towards recovery, albeit a gradual one. Additionally, it also points to neurological recovery, which is definitely a good sign.

The news comes months after his son, Mick, said through a sports commentator that his father was "slowly been waking up."

These positive signs come months after the ace F1 driver woke up from a medically induced coma. Doctors had put him in a coma as he suffered from significant brain damage after his skiing accident. Fans may recall that the highly hardworking and dedicated racer attained severe head injuries while skiing on the French Alps in December, 2013. Schumacher fell on a rock and was rushed to the hospital. While the fall was a bad one, the skilled driver would have instantly died had he not had his headgear on.

Since he woke from the medically-induced coma, the driving champion has been rehabilitated to his home in Lake Geneva in Switzerland. Latest reports suggest that Michael Schumacher will now be bound to a wheelchair and undergo extensive physical therapy in order to prevent muscle degeneration.

Doctors have expressed little hope in Schumacher making a full recovery, but his wife, who has devoutly stood by his side, says she remains hopeful despite the prognosis. Some experts say that it is difficult to determine the recovery of a head trauma patient, while others say he could take three years to fully recover. Twitter fans have taken to social media to express their prayers, support and concern using the hastag #KeepFightingMichael.

Fellow race drivers and members of his home team, Mercedes, have also expressed their support on Twitter.-News update by Physiotherapy Jobs Portal 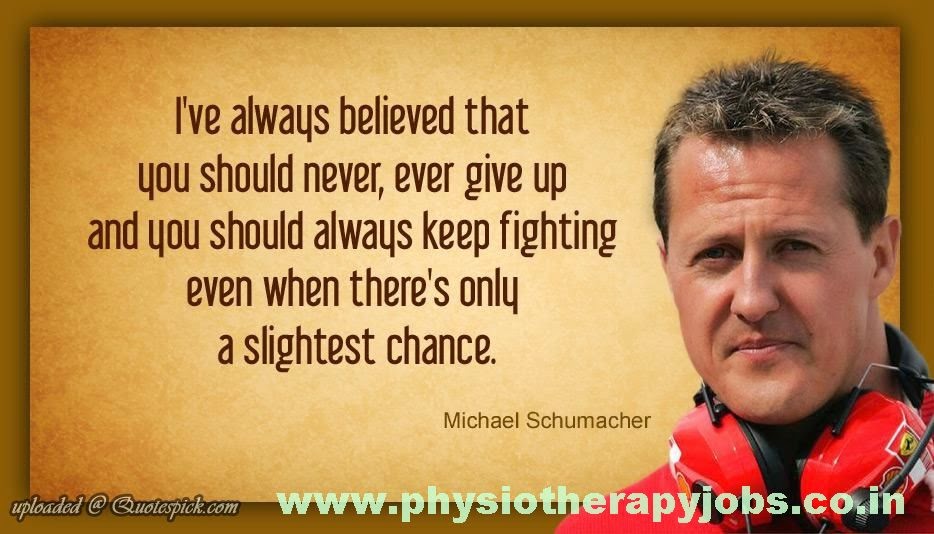