October 07th is World Cerebral Palsy Day , an innovation project that was launched in 2012 by Cerebral Palsy Alliance (Australia) and United Cerebral Palsy (USA). It is supported by over 270 cerebral palsy service organisations, universities, parent groups, research institutions, student groups, schools and children's hospitals from 46 countries. More than an awareness day, the project aims to gather ideas from people with cerebral palsy and their supporters, and make the best of those ideas a reality. 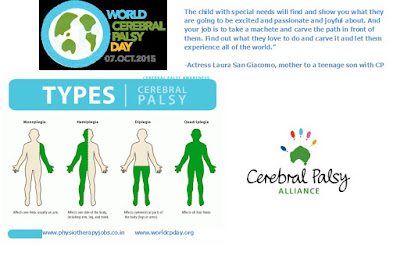 The theme is "Change My World in One Minute". Participants post text or a video for an idea that, if invented, would change their world. The idea must take no longer than one minute to read or view.

In 2012, more than 470 ideas were posted on the World CP Day website. Three ideas were shortlisted and then the call went out to inventors. A research team from the University of Virginia (USA) won the major prize. They developed a prototype solar powered wheelchair which was an idea posted by Alper Sirvan, a man with cerebral palsy in Turkey. The wheelchair prototype was presented to Alper on World CP Day 2013.