The antigravity treadmill relies on advanced air pressure technology, which, after calibrating the user’s weight, reduces the load and impact on legs and joints at anywhere between 20 and 100 percent of the user’s body weight to allow them to walk or run.

Physiotherapists throughout the world have hailed the treadmill for its role in expediting rehabilitation for athletes overcoming lower leg injuries, or for patients with a variety of medical conditions such as Strokes, Parkinson’s Disease and total knee and hip joint replacements.

It’s more widely used across the United States where it is a regular feature of the recovery process for injured professional basketballers and American Footballers.

“We are delighted to expand our offering by providing this new facility in conjunction with an in-house consultant physiotherapist,” commented Tim Forde, Active Ennis General Manager.

“Built in Silicon Valley using the NASA technology, this unique device has proven to be extremely successful in the areas of sports and medical rehabilitation and obesity. It has been utilised by top Olympic athletes, Premiership soccer teams and Irish Rugby players.

“We would invite anyone interested in seeing the AlterG in operation or finding out more about the technology behind the treadmill to call into Active Ennis Leisure Complex,” added Mr. Forde.

“The AlterG treadmill is perfect for individuals who have suffered a lower extremity injury, like an anterior cruciate ligament (ACL) reconstruction, hip or foot and ankle injury,” explained Anne Marie Kinsella, a Chartered Physiotherapist who is based with Active Ennis.

“Active Ennis has already received significant interest from sports clubs looking to treat athletes who are recovering from injury or seeking to avoid an injury, as well as patients who are post-operative or trying to prevent surgery. Non-injured athletes have also found ways to utilise the AlterG before and after endurance events. For example, long distance runners can use the treadmill without the impact before a marathon, or equally as a tool for recovery following a long race.

“Even stroke patients can benefit as the AlterG helps to retrain their legs and brain with supported movements,” added Ms. Kinsella. 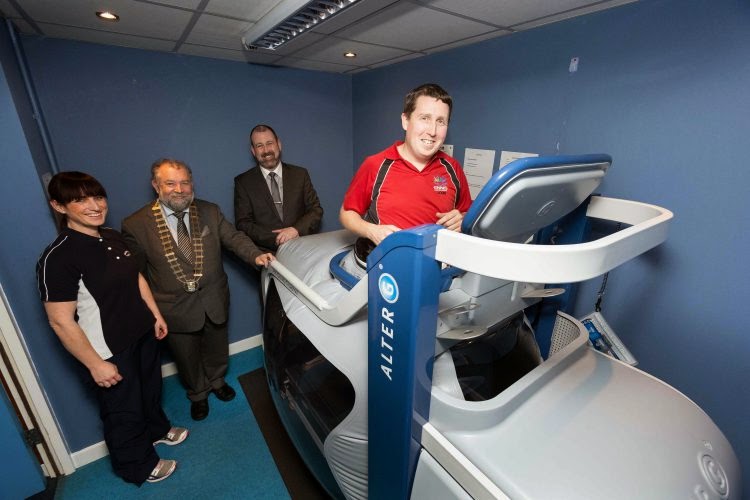