A Video Game for Physical Therapy

A Video Game for Physical Therapy:

Repeating mind-numbing Physical therapy so you can use your hands can really suck. To try to regain use of your arm, you must painstakingly practice exercises that are dull enough to anesthetize Grumpy Cat. Clench your fist. Wiggle index finger. Crunch a Coke 150 times. Repeat daily for the foreseeable future.

The Music Glove aims to obliterate the monotony, Guitar Hero-style. People wear the glove on their affected hand (strokes typically affect one side of the body), and the glove communicates with a specially created music game displayed on the connected Android tablet — provided as part of the package. Players need to make different hand movements, such as pinching their fingers to their thumb, to advance through the levels — the same movements patients need to recover. Over time, it tricks your hand into getting better.

So far only about 100 have been sold but the potential market is huge.

The Centers for Disease Control and Prevention says more than 795,000 people a year suffer strokes, and many survivors have mobility issues. Music Glove CTO Daniel Zondervan understood that boredom was a factor in people failing at their physical therapy. Most stroke patients have two weeks of therapy before going home, and many insurance plans don’t cover extra sessions; patients are left with a booklet of instructions, which many don’t stick to. Zondervan thought that gamifying therapy might make a difference, and experimented until he came up with the Music Glove.

Not all physical therapists are sure it’s for everyone. “It sounds very clever, but I’m not sure if older people would find it that easy to use a tablet,” said Hilary Sentell, a certified athletic trainer who works at The Jackson Clinics in Virginia. Sentell felt she’d need some time with the glove to gauge its effectiveness — which is unlikely as her clinic would need to approve the $4,200 purchase. The cost is higher for clinics (the kit contains gloves for both hands and different sizes); home-use versions are priced at $1,149. Insurers don’t cover Music Glove. And don’t expect a Guitar Hero experience; due to licensing issues, you won’t recognize any of the music.

Still, it worked for Janet Johnson, a 60-year-old former aerospace engineer and pipe-fitter orbital welder. She started using the glove after she suffered a stroke in 2009 and had exhausted her insurance options. Although initially wary of the “game” element — video games weren’t “part of my childhood,” she told OZY — she kept going. After six weeks she noticed improvements, like being able to type again. Yes, the cost can be prohibitive, says Johnson. But if you’ve exhausted your insurance, she thinks the take-home therapy option is worth it.

Even though it didn’t turn her into a Guitar Hero maestro. She bought a Guitar Hero kit on eBay, set it up in the living room … and then found it way too complicated. “There was too much going on,” she said. “It was all lights and buttons; it’s now back in the box.” 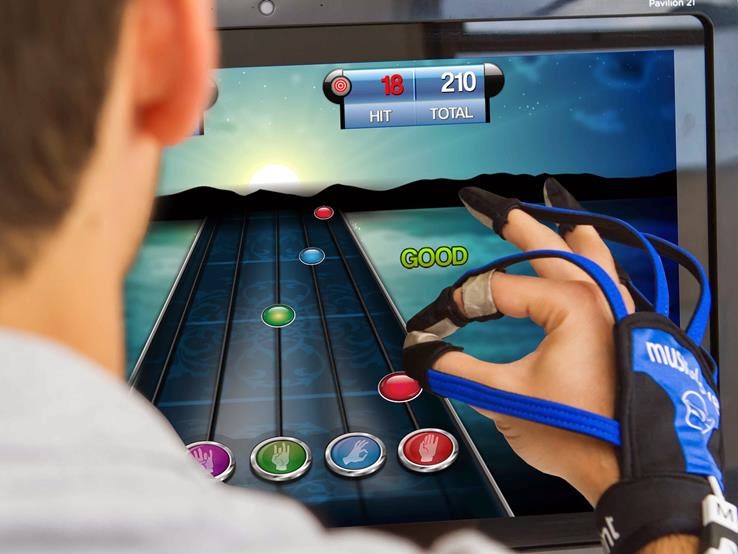