An Inspiring Story of a Paraplegic Ms.Deepa Malik who ‘bounced back’ in life with the help of Physiotherapy and her determination

An Inspiring Story of a Paraplegic Ms.Deepa Malik who ‘bounced back’ in life with the help of Physiotherapy and her determination, created records, won an Arjuna award, travelled around the world and helped formulate policies for people with disabilities playing Sports. Today she is thankful to all those people who made her even more determined to break the stereotype.

She made alterations in her home and slowly learnt to live in her new body. She was into fitness with regular Physiotherapy& Hydrotherapy. Deepa Malik calls herself ‘wheelchair-liberated,’ and is on a mission to urge people with disabilities to take up sports seriously.

Her life is an inspiration. Yet, she is proud to say she feeds on negativity. Because it is this negativity from people that has made her achieve the many milestones in her life and helped her bounce forward. She despises the term “bounce back”.

When repetitive tumour formations in her spinal cord left her a paraplegic, bound to a wheelchair, paralysed chest down, people assumed she would “die within the four walls of a room”.

And, it was this assumption she wanted to correct. Thus began the journey of Deepa Malik, who today proudly bears the tag of being the country’s first and oldest para-swimmer-athlete-biker-car rallyist. Para sports are sporting events played by those with disabilities. Besides the local and national levels, they can also represent their country at the Asian Para Games and Paralympics.

A free spirit with a great love for the outdoors, especially biking, Deepa grew up as a daughter of an Army officer. So, as a young girl when she was diagnosed with her first tumour in the spinal cord, her world came crashing down. It was her parents who saw her through surgery and rehabilitation and she could stand on her own feet.

But her happiness was short-lived. After her marriage to an Army officer in 1992 and the birth of two daughters, she learnt hers was a case of repetitive tumours and by 1999, Deepa realised she would lead the life of a paraplegic in a wheelchair. Deepa says she did not realise the enormity of it all till friends, neighbours and relatives started offering “condolences.” The three painful surgeries, 200 stitches on her ever-degenerating spinal cord, lack of bladder control , and various other ailments did not hurt her as much as the words of these people. But today she is thankful to all those people who made her even more determined to break the stereotype.

She made alterations in her home and slowly learnt to live in her new body. She was into fitness with regular physiotherapy and hydrotherapy. But she could not alter the mindset of the people who ignored her and did not include her in any social activities.

It was then that she decided to make efforts to join the mainstream. She started a small garden restaurant that turned out to be a great hit. She started catering for large parties and made all those who turned away from her, to come to her for their party needs.

A television channel featured her and her restaurant. Someone saw her swim and called up to ask whether she could take part in swimming at the national level para sports meet. That was the life-changing moment for Deepa for whom her second innings began at the age of 36. After winning several medals for her State and country in para-swimming, she moved on to athletics. Here too, she won laurels. Then it was biking and later car rallying. Every step came with hurdles – sponsorships, clearances for modified bikes and cars, obtaining special licences. But she moved on regardless. She created records, won an Arjuna award, travelled around the world and helped formulate policies for people with disabilities playing sports. But Deepa does not want laurels for her awards and achievements and wants to be much more than the clichéd “role model”.

But she is happy when she is known as someone who inspired those with disability to take up an active sport. She urges them to move out so that the society becomes more open to their needs and creates disability-friendly infrastructure.

On her wish list is scuba diving, an Academy for training people on wheelchair, creating awareness in the corporate world and among individuals about sponsoring people for para sport events. Forty four-year-old Deepa calls herself as wheelchair-liberated and not wheelchair-bound.

It took two years of treatment and physiotherapy for Deepa to accept that her paralysis was for life. Her family has been her real strength, they have made changes around the house to make her more self sufficient.

“I strongly feel that the outdoors is a good way to keep fit. When I challenge myself for activities like these, I have to seriously train for it. The only way we, wheelchair users can lead a normal life is by keeping our body toned and exercised. Going to a doctor or hospital everyday for formal physiotherapy can be monotonous and makes you feel like a patient. But when you train and workout for fun activities, you not only get the required exercise but it also boosts up your morale. Others then take inspiration to be happy and healthy” says Deepa Malik.

She has won numerous accolades for her participation in various adventure sports. Whether it is swimming against the strong Yamuna current, or riding a special bike or even taking a shot at the Paralympic Games, she has done it all. She has won bronze medal in Women's Javelin Throw. She has got nominated in Limca Book of Records for her swimming records. She is associated with Himalayan Motorsports Association (H.M.A.) and Federation of Motor Sports Clubs of India (F.M.S.C.I.). She has done 8 days 1700 k.m. drive in minus degree temperatures. Even on an altitude of 18000 feet with oxygen shortage, she was able to sustain it all. It was - Raid De Himalaya. This journey covers many difficult paths including remote Himalayas, Leh, Shimla and Jammu.-Compiled  by Physiotherapy Jobs Portal. 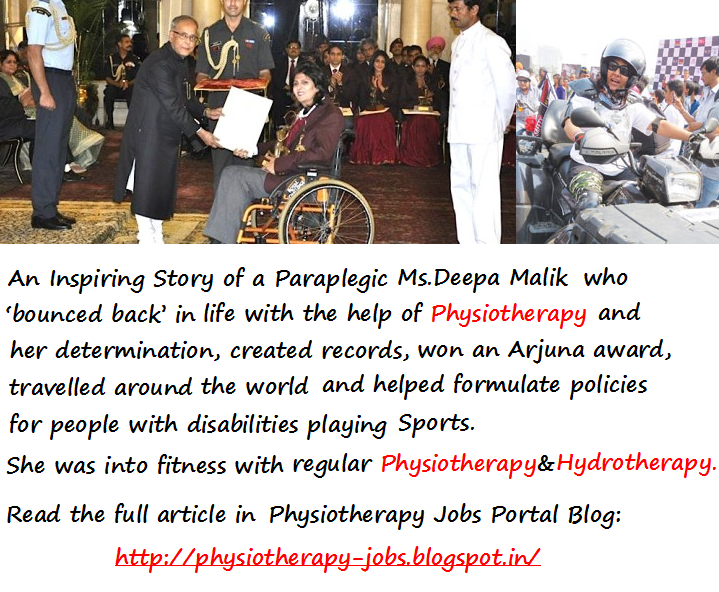