Physical Therapy as Good as Surgery for Osteoarthritic Knees and Torn Meniscus:

Physical Therapy as Good as Surgery for Osteoarthritic Knees and Torn Meniscus:

Arthroscopic knee surgery for osteoarthritis is one of the most unnecessary surgeries performed today, as it works no better than a placebo surgery.

Proof of this is a double blind placebo controlled multi-center (including Harvard’s Mass General hospital) study published in one of the most well-respected medical journals on the planet, the New England Journal of Medicine (NEJM) over 10 years ago.

Despite this monumental finding, some 510,000 people in the United States undergo arthroscopic knee surgery every year. And at a price of anywhere from $4,500 to $7,000 per procedure, that adds up to billions of dollars every year spent on this surgery.

Osteoarthritis of the knee is one of the primary reasons patients receive arthroscopic surgery. This is a degenerative joint disease in which the cartilage that covers the ends of the bones in your joint deteriorates, causing bone to rub against bone.

Arthroscopic knee surgery is also commonly performed to repair a torn meniscus, the crescent-shaped fibrocartilaginous structure that acts like a cushion in your knee.

Many might think that this problem, surely, would warrant surgery. But recent research shows that physical therapy can be just as good as surgery for a torn meniscus, adding support to the idea that when it comes to knee pain, whether caused by osteoarthritis or torn cartilage, surgery is one of the least effective treatments available...

Physical Therapy as Good as Surgery for Torn Cartilage and Arthritis

The featured study, also published in NEJM, claims to be one of the most rigorous studies yet comparing treatments for knee pain caused by either torn meniscus or arthritis. According to the Washington Post (The Washington Post March 18, 2013)

“Researchers at seven major universities and orthopedic surgery centers around the U.S. assigned 351 people with arthritis and meniscus tears to get either surgery or physical therapy. The therapy was nine sessions on average plus exercises to do at home, which experts say is key to success.

After six months, both groups had similar rates of functional improvement. Pain scores also were similar.

Thirty percent of patients assigned to physical therapy wound up having surgery before the six months was up, often because they felt therapy wasn’t helping them. Yet they ended up the same as those who got surgery right away, as well as the rest of the physical therapy group who stuck with it and avoided having an operation.”

Another study published in 2007 also found that exercise was just as effective as surgery for people with a chronic pain in the front part of their knee, known as Chronic patellofemoral syndrome (PFPS), which is also frequently treated with arthroscopic surgery.

The study compared arthroscopy with exercise in 56 patients with PFPS. One group of participants was treated with knee arthroscopy and an eight-week home exercise program, while a second group received only the exercise program. At the end of nine months, patients in both groups experienced similar reductions in pain and improvements in knee mobility.

A follow-up conducted two years later still found no differences in outcomes between the two groups.

In an editorial about the featured study, Australian preventive medicine expert Rachelle Buchbinder of Monash University in Melbourne urges the medical community to change its practice and use physical therapy as the first line of treatment, reserving surgery for the minority who do not experience improvement from the therapy.

“Currently, millions of people are being exposed to potential risks associated with a treatment that may or may not offer specific benefit, and the costs are substantial,” she writes. “These results should change practice. They should also lead to reflection on the need for levels of high-quality evidence of the efficacy and safety of surgical procedures similar to those currently expected for nonoperative therapy.”-Update by Physiotherapy Jobs Portal (www.physiotherapyjobs.co.in)


Surgery versus physical therapy for a meniscal tear and osteoarthritis: http://www.ncbi.nlm.nih.gov/pubmed/23506518

A controlled trial of arthroscopic surgery for osteoarthritis of the knee: http://www.ncbi.nlm.nih.gov/pubmed/12110735?dopt=Abstract 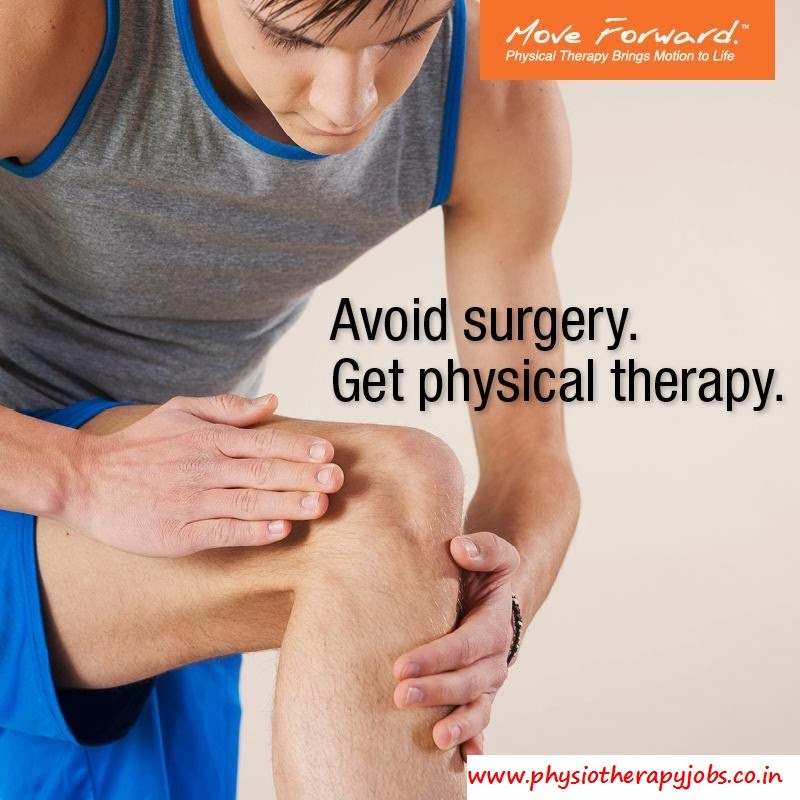