Physical Therapy for CTS Often As Effective as Surgery:

Results of a randomized clinical trial, published in The Journal of Pain, showed that surgery and Manual physical therapies were similarly effective in improving pain and function for patients with carpal tunnel syndrome (CTS).

The Journal of Pain is the peer-review publication of the American Pain Society.

A multicenter team of Spanish researchers conducted a randomized clinical trial to compare the one-year effectiveness of manual physical therapies, including desensitization maneuvers of the central nervous system, and surgery in patients with CTS. CTS surgery has the highest utilization rate among upper extremity procedures performed.

CTS is a pain disorder in the upper extremity caused by compression of the median nerve at the carpal tunnel. Prevalence in the United States is estimated at 6 to 11 percent, and six-year cumulative lost income per patient ranges from $45,000 to $89,000, according to the study. Treatment can be conservative or surgical, but scientific evidence for each therapeutic option is conflicting.

For the study, 120 women with CTS were randomized in two groups: treatment with physical therapy and treatment with surgery. At 12 months, 92 percent of the study participants completed the follow-up.

Based in Chicago, the American Pain Society (APS) is a multidisciplinary community that brings together scientists, clinicians and other professionals to increase the knowledge of pain and transform public policy and clinical practice to reduce pain-related suffering.

This randomized clinical trial investigated the effectiveness of surgery compared with physical therapy consisting of manual therapies including desensitization maneuvers in carpal tunnel syndrome (CTS). The setting was a public hospital and 2 physical therapy practices in Madrid, Spain. One hundred twenty women with CTS were enrolled between February 2013 and January 2014, with 1-year follow-up completed in January 2015. Interventions consisted of 3 sessions of manual therapies including desensitization maneuvers of the central nervous system (physical therapy group, n = 60) or decompression/release of the carpal tunnel (surgical group, n = 60). The primary outcome was pain intensity (mean pain and the worst pain), and secondary outcomes included functional status and symptoms severity subscales of the Boston Carpal Tunnel Questionnaire and the self-perceived improvement. They were assessed at baseline and 1, 3, 6, and 12 months by a blinded assessor. Analysis was by intention to treat. At 12 months, 111 (92%) women completed the follow-up (55/60 physical therapy, 56/60 surgery). Adjusted analyses showed an advantage (all, P < .01) for physical therapy at 1 and 3 months in mean pain (Δ -2.0 [95% confidence interval (CI) -2.8 to -1.2]/-1.3 [95% CI -2.1 to -.6]), the worst pain (Δ -2.9 [-4.0 to -2.0]/-2.0 [-3.0 to -.9]), and function (Δ -.8 [-1.0 to -.6]/-.3 [-.5 to -.1]), respectively. Changes in pain and function were similar between the groups at 6 and 12 months. The 2 groups had similar improvements in the symptoms severity subscale of the Boston Carpal Tunnel Questionnaire at all follow-ups. In women with CTS, physical therapy may result in similar outcomes on pain and function to surgery.

This study found that surgery and physical manual therapies including desensitization maneuvers of the central nervous system were similarly effective at medium-term and long-term follow-ups for improving pain and function but that physical therapy led to better outcomes in the short term. 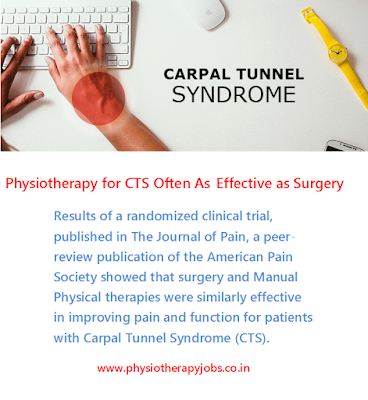