The National Board for Allied Health Sciences (NBAHS) proposed to be set up by the Union Ministry of Health and Family Welfare (MoH & FW) will divide the functional areas of Allied Health Professionals (AHP) into three categories namely diagnostics, technical and therapeutics for drafting separate standard operating procedures. Besides, it (NBAHS) will be the common regulatory agency for the AHP.

The MoH & FW has felt the need to have uniform guidelines and norms for AHP by bringing them under one umbrella (NBAHS) on the lines of similar regulatory systems followed in the developed countries.

The NBAHS will make a comprehensive set of rules governing the ‘support services’ rendered by AHP in order to have standardised mechanism thereof. “Healthcare professionals like physiotherapists, pathology technologists and medical radiation technologists are playing a vital role in delivering healthcare in the nation. It is to acknowledge their efforts that the government has decided to set up the NBAHS for ensuring proper standards and their professional development”, said Shri. G. Krishna Murthy, Director of R&D at Dr. NTR University of Health Sciences (NTRUHS).
He told The Hindu NBAHS provides a platform for standardisation of courses and curriculum in physiotherapy, optometry, speech language pathology, medical lab technology, radiography etc.

The Public Health Foundation of India (PFHI) suggested to the MoH & FW to form the institution with the stated purpose.
A study by it recommended that there should be an establishment of national and regional institutes of allied health sciences as autonomous bodies fully funded by the Central government.

Role of a common regulator

The NBAHS will be playing the role of a common regulator like the Medical, Dental and Nursing Councils of India and the Central Council of Indian Medicine of the Ministry of AYUSH.
Another objective of NBAHS is to make skilled AHP available for future needs as they are expected to be in short–supply over the next few years.

Under the existing unorganised setup, the quality of services provided by AHP has been found to be poor as they adopted their own standards which drastically varied from one place to another. This adversely affected the treatment outcomes causing death or morbidity in many cases. 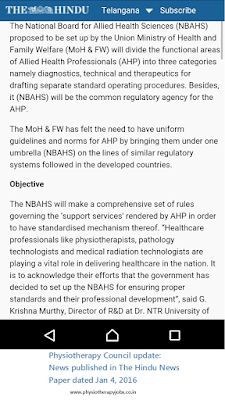