Researchers suggest using a graded approach based on pain tolerance to slowly increase function, rather than using drugs to kill the pain.
Patients who have not been prescribed opioid painkillers benefit more from Physical therapy, according to researchers in Canada.A study at the University of Alberta found patients not taking the powerful drugs for pain while rebuilding physical ability regain function faster.

In the study, published in the Journal Pain Medicine, researchers followed 789 patients in Canada being treated for neuropathic pain from nerve injuries being treated with either less than 200 milligrams of an opioid, more than 200 milligrams, or none.Patients who were not prescribed any type of opioid had statistically lower disabilities and higher physical function scores over the course of 12 months than those who received the drugs, after adjusting for the severity of individual conditions.

Bostick said opioids can be useful for managing pain, though they do not allow some people to recover function, so the drugs interfere with their lives. He suggests patients use careful measurement of their pain tolerance, walking until they reach the halfway point of what they can handle and stop before it gets too bad, in order to build tolerance over time.

"Pain is very complex, and people experience pain at very different levels," Bostick said. "Opioids can help people with severe pain be more comfortable, but if they are not also facilitating improved function, the impact of these medications on quality of life should be questioned."-Update by Physiotherapy Jobs Portal (www.physiotherapyjobs.co.in) 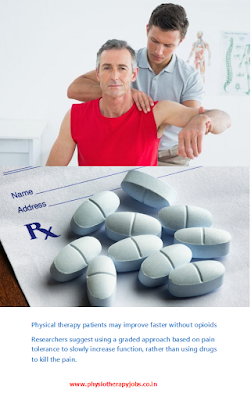