Boston: Adding either manual or exercise physical therapy (PT) to usual care for patients with osteoarthritis (OA) of the knee and hip can significantly improve pain and stiffness according to 2-year follow-up of a randomized, controlled trial.

"If you're not prescribing this for everyone with OA, well, get with the program," said lead investigator J. Haxby Abbott, DPT, PhD, from the University of Otago in Dunedin, New Zealand.

"Exercise has been recommended for a while now, but still most people don't get referred. What are the barriers? Some people say they think it only works for a few weeks and then it's a waste of time -- well, no, here we have a 2-year follow-up showing it works."

The trial included 206 adults (mean age 66 years) with hip or knee OA, all of whom were receiving usual care.

Both types of therapy were delivered by physical therapists in a PT clinic. Subjects received seven weekly sessions and were then instructed to continue prescribed exercises alone with three other booster visits during the study.

Subjects in the exercise PT group were instructed about strengthening and range of motion exercises as well as balance and agility exercises, Abbott said during a press conference at the annual meeting of the American College of Rheumatology.

"Manual therapy could be defined as the skilled passive movement of a joint provided by the physical therapist," he explained. The primary outcome of the study was change in the Western Ontario and McMaster osteoarthritis index (WOMAC) score.

Among the 186 patients who remained in the trial after 2 years of follow-up, there were clinically significant improvements in both pain and disability in all three groups that received additional therapy compared with those receiving usual care only, said Abbott.

"Patients who continued with usual care alone were viewed to worsen over time, and at the 2-year follow-up they were 20% worse than they were at baseline," he said.
Improvements from baseline were statistically significant for both the exercise and manual therapy groups, but did not quite reach statistical significance for the combined therapy group. However, when compared with patients who received usual care only, all three intervention groups had clinically significant improvements, he said.

"To give some context, the effects size for medications such as nonsteroidal anti-inflammatory drugs is around about 0.35 ... so ... providing these interventions over and above usual care is conferring additional benefit," said Abbott.

"A key message is that, in people who do not yet need joint replacement surgery, we found improved pain and physical function in patients who had our exercise therapy and manual therapy PT intervention protocols in addition to usual medical care, whereas patients who received usual medical care only deteriorated significantly over the 2-year follow-up period," he said.

"These findings should be welcomed by people with osteoarthritis, doctors, and other clinicians because it shows that, compared with usual medical care without a referral to PT, the PT interventions of our exercise therapy and manual therapy protocols were very effective, even at 2 years from when they were commenced. Both of these nondrug interventions are safe and effective for people with osteoarthritis across the spectrum from mild, moderate, to near-end-stage joint degeneration." 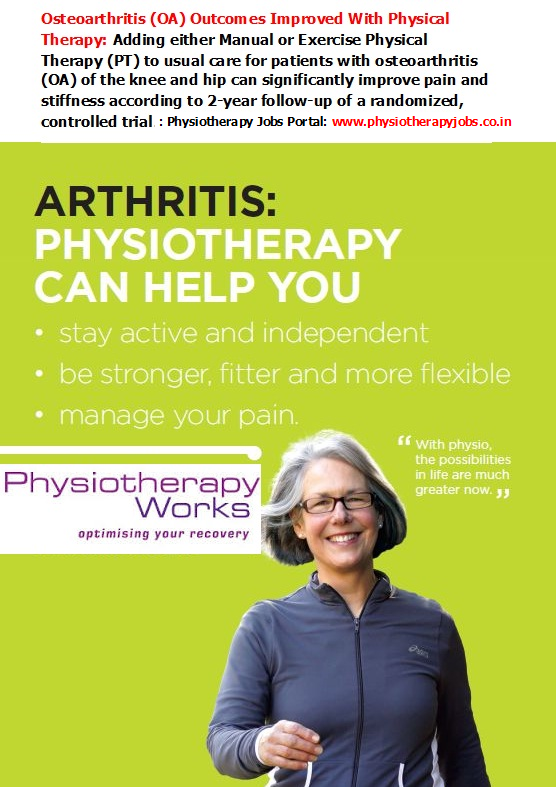