Patients with musculoskeletal conditions should be able to see a physiotherapist instead of a General Practitioner (GP) as a first option, the Chartered Society of Physiotherapy (CSP) said today.

The CSP said that offering patients better access to physiotherapists would allow GPs to save money and spend more time with other patients.

The CSP has launched a new online Physiotherapy Cost Calculator to show how much GPs can save, which says that a typical GP practice provides 249 appointments a week for musculoskeletal conditions at a cost of £6,346.40 a week, whereas it would cost a physiotherapist £3,800.47 to see the same number.

Karen Middleton, chief executive of the CSP, said: “Both GPs and patients are concerned about the inadequate length of appointments. But, it doesn’t have to be this way. “Expanding the number of physiotherapists working in GP surgeries - and giving patients with musculoskeletal conditions the option of seeing them first could add on average five minutes to appointments.”

A pilot scheme is already in place in West Cheshire to allow patients to see a physiotherapist as a first point of contact.

During a three-month pilot over 700 patients accessed the service who would otherwise have seen a GP. It has now been expanded to cover all 36 GP practices in West Cheshire after receiving funding from the Prime Minister’s Challenge Fund.

Dr Maureen Baker, chair of the Royal College of General Practitioners, said: “Whilst the services GPs and physiotherapists provide complement each other, they are very different, so whilst we would welcome better integration between the two we would recommend that any self-referral schemes reflect local needs and are continuously evaluated.

“We would also need assurances that patients do not fall prey to providers who are not accredited by the Chartered Society of Physiotherapy, whose members are trained to the highest standards and have the skills to identify health problems that go beyond musculoskeletal conditions.” 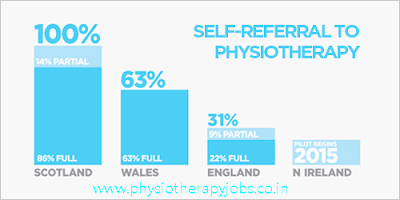